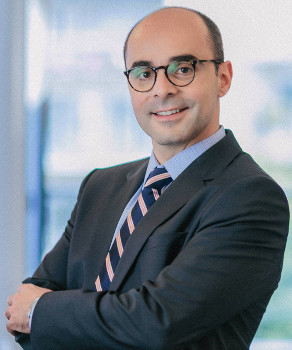 Dr. Sioulas graduated with excellence from the Medical School of the University of Athens in 2002. Later on, he received his PhD in “Menopause” and his MSc in “High Risk Pregnancies”; both degrees were awarded with excellence. Dr. Sioulas completed his residency at the 3rd Department of Obstetrics and Gynecology of the University of Athens (Attikon Hospital), where he worked as a Clinical/Research Associate until 2014.

Thereafter, he was selected among highly qualified candidates from all over the world to join the International Fellowship in Gynecologic Oncology at Memorial Sloan Kettering Cancer Center (NY, USA). During his 2-year fellowship, he worked closely with top Gynecologic Surgeons and performed a very large number of robotic, laparoscopic and open surgeries on patients with gynecologic cancers or complex benign diseases of their genital tract. After his graduation, he was also certified as Gynecologic Oncologist by the European Society of Gynaecological Oncology (ESGO).

Dr. Sioulas is currently working as an Obstetrician-Gynecologist, with emphasis on the surgical treatment of malignant and benign diseases with the use of the most contemporary techniques. His goal is to offer high quality services to his patients, on the basis of the most recent American and European guidelines. He is affiliated with MITERA Hospital, where he is the Head of the Department of Gynecologic Oncology, and HYGEIA Hospital. In addition, Dr. Sioulas runs his private clinic in the center city.

Endometrial cancer is the most common gynecologic malignancy in western countries. When diagnosed in early stage, the prognosis of the patients is excellent. In this context, the optimal surgical treatment of the disease is of paramount importance.
The primary goal of surgery is to determine the extent of cancer or, as called, the stage of disease. Its mainstay is the removal of the uterus with the cervix (hysterectomy), the fallopian tubes and the ovaries. Although comprehensive lymphadenectomy may detect metastatic disease in few cases, it does not benefit the majority of patients with endometrial cancer. On the contrary, it is associated with increased intra-operative and long term complications (e.g. vascular or nerve injury, swelling of the legs or lymphedema, lymphocysts). Therefore, the need of better surgical tools to diagnose lymph node metastases with minimal morbidity is crucial.
Sentinel lymph node is the first node to receive drainage from the primary tumor. Thus, it is the most likely to harbor metastases in cases with lymphatic spread. In endometrial cancer, the most contemporary technique for the intra-operative recognition of sentinel lymph node is based on the use of a dye (indocyanine green), which is injected into the cervix when the patient is under anesthesia. As this dye cannot be seen by the human eye, the use of a highly specialized camera is required for the performance of the technique. This can be accomplished with the robotic platform Da Vinci Xi, which offers the FireFly fluorescence imaging. Importantly, robotic surgery (minimally invasive surgery) for patients with endometrial cancer is moreover associated with less blood loss and postoperative pain, fewer wound complications, shorter hospital stay, faster recovery and better cosmetic results.
Nowadays, accumulating data has pointed out that the use of sentinel lymph node biopsy for endometrial cancer staging is associated with high diagnostic accuracy and does not compromise the oncologic outcomes. In addition, it has the potential to expose fewer patients to the morbidity of complete lymphadenectomy. Taken together, it is widely recognized that, when performed by an experienced surgeon, sentinel lymph node biopsy can replace lymphadenectomy for the surgical treatment of selected patients with endometrial cancer.

OBSTETRICIANS GYNAECOLOGISTS
This website uses cookies to improve your experience. We'll assume you're ok with this, but you can opt-out if you wish. OKRead More