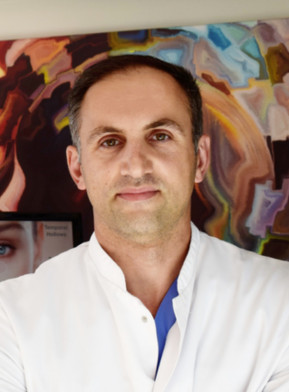 Mr. Karkatzoulis Georgios is the ENT Director and Head of the Department of Functional and Aesthetic Rhinosurgery (nose surgery) at Paleo Faliro Medical Center. He is a Global Ambassador of the Aesthetic Multispecialty Society, one of the largest aesthetic medicine companies in the world. He has been elaborately and intensely trained in facial plastic surgery, and more specifically in rhinoplasty, microscopic and endoscopic nasal and laser surgery in distinguished international centers (including the university ENT clinics of Cologne, Magdeburg, Düsseldorf, Essen, Tübingen).

A few words about our Doctor

Mr. Karkatzoulis Georgios was born in 1979 in Maroussi, Attica. In 1999, he was admitted to the Medical School of Patras. He graduated in 2006 with a grade of ‘Excellent-10″ in ENT.

In 2009, he achieved his license to practice medicine in Germany.

In 2010-2011, he worked as an ENT resident at the ENT Clinic in Magdeburg,
Germany. In 2011-2015, he was a resident in ENT and facial plastic surgery at the Krupp ENT clinic in Essen, Germany. In 2015, he obtained the German title of ENT specialist. In 2015, he became Consultant (Facharzt) at the ENT clinic in Krupp, Essen, Germany. In 2016-2017, he was senior consultant (Oberarzt) at the ENT clinic of the Siloah-Pforzheim hospital in the state of Baden-Württemberg, Germany. From May 2018 until present, he is a private otolaryngologist (ENT) surgeon and in January 2021, he became the ENT director of the Functional and Aesthetic Rhinoplasty Department of Athens Medical Center (Paleo Faliro Clinic).

2015 – Consultant (Facharzt) at the Krupp ENT Clinic in Essen, Germany.

2016-2017 – Senior Consultant (Oberarzt) at the ENT clinic of the Siloah-Pforzheim hospital in the state of Baden – Württemberg, Germany.

OTOLARYNGOLOGISTS
This website uses cookies to improve your experience. We'll assume you're ok with this, but you can opt-out if you wish. OKRead More