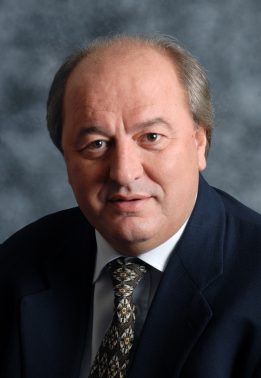 Born in Sykourio, Larissa in 1954, he graduated from the Medical School of the “Aristotle University of Thessaloniki” and had his train- ing in Cardiothoracic Surgery under Professor Panayiotis Spyrou at the “G. PAPANIKOLAOU” Hospital in Thessaloniki. He continued his postgraduate training at the “Royal Brompton” Hospital of London for two years and worked as a Senior Registrar at the “Onassis Cardiac Surgery Centre” for 8 years. He organized in 2001, the Department of Cardiac Surgery at the “HENRY DUNANT” Hospital and is the Director ever since.
He is one of the world’ s pioneers in Off-Pump surgery (OPCAB). He inspired the globally recognized arterial “Π-graft” technique, supplemental to the OPCAB method, applying Off-Pump, aorta non- touch, and total arterial revascularization. The method proved to be safe and superior to the classic On-Pump Bypass for high risk patients, such as octogenarians, diabetics, patients with renal insufficiency, carotid disease, his- tory of stroke, porcelain aorta and other chronic diseases. On the other hand, the use of mammary arteries in young patients is associated with better long-term results. In 2005, Dr. Prapas, was the first to have implemented in Greece, a combination of an Off- Pump surgical treatment and autologous bone-marrow implantation which appears to improve the patients’ functional status.
His academic work consists of numerous full text papers and abstract publications in International Medical Journals, presentations in many International Congresses, many lectures around the world, as well as, a series of visits to over 60 Centers abroad for a live demonstration of the “Π-graft” technique. He is a PhD of the National and Kapodistrian University of Athens. He has taught in the European School of Cardiac Surgery in Bergamo in 2009. Along with Professor M. Tourina were assigned by the “Razavi Hospital” Board of Directors, to establish the “Iranian School for Cardio-Thoracic Surgery”, in Mashhad, Iran. He was the Chairman of the 18th W.S.C.T.S. Congress in Kos island, in Greece in 2008. He is the Chancellor of “THE EURO-ASIAN BRIDGE” Society, a link between Cardiac Surgeons from 28 countries, from Balkans and Middle East, which he personally in- spired and created in 2004, promoting the cooperation and friendship among neighbor colleagues. Since 2012, is the Vice Chancellor of the World Society of Cardio- thoracic Surgeons (W.S.C.T.S). He is also member in 10 international societies, including the American STS, the ISMICS, the Europeans’ E.A.C.T.S. and ESCVS, the Asian Society and others.
Considered as one of the recognized Cardiac Surgeons of the world, proven by the following:
Professor Denton Cooley, known as “father” of contemporary Cardiac Surgery, congratulated him for the “Π-graft” technique, during the 14th W.S.C.T.S. Congress, in San Diego, California, in 2003, because the technique almost eliminates the possibility of perioperative stroke.
In May 2006, in Saint Petersburg, Russia, during the 55th Annual European Congress of ESCVS, he operated and presented live via broadcasting network the surgery of a Russian patient, using the Π-graft technique.
He was chosen by Medtronic company as one of the 8 distinguished Cardiac Surgeons performing OPCAB, to present their experience at the 20th European Congress of E.A.C.T.S., in Stockholm, Sweden.
He established an international center of OPCAB surgery using the “Π-graft” technique, in the “HENRY DUNANT” hospital in which ten surgeons from abroad were trained on the method.
Dr Federico Benetti, known as the “father” of Off-Pump surgery, wrote to his recommendation letter: “… Sotirios Prapas is undoubtedly one of the most important Cardiac Surgeons of these times”.

Thoracic - Cardiac Surgeons
This website uses cookies to improve your experience. We'll assume you're ok with this, but you can opt-out if you wish. OKRead More